It Came from the Nightosphere is season premeire of Season 2 and 27th episode of Adventure Time. It came out October 11, 2010. In 2011, this episode was nominated for the 63rd Primetime Emmy Awards for the "Outstanding Short-Format Animated Program" award.

Finn releases Marceline's dad from the Nightosphere in order to fix their broken relationship, but soon finds out that he is the Lord of Evil and has to stop him from going on a soul-sucking rampage. 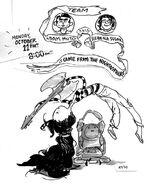 Hunson Abadeer (sucking souls) modelsheet
Add a photo to this gallery
Retrieved from "https://adventuretimesuperfans.fandom.com/wiki/It_Came_from_the_Nightosphere?oldid=32749"
Community content is available under CC-BY-SA unless otherwise noted.