Ice Queen is the gender-swapped version of Ice King. She, like the Ice King, also has Ice Powers that comes from the power of their crown/tiara. She is obsessed with Princes as Ice King is obsessed with Princesses. In the episode, "Fionna and Cake," she comes into Gumball's castle in a fit of rage, forming large ice spikes and crashes through the door. She refers Fionna as being a tom boy, then forms a sludge beast monster to attack Prince Gumball. The beast attacks Gumball, but it is stopped by Fionna swinging Cake in her "morning star" mode at the beast. It is assumed that when Gumball and her were in the sludge beast, Ice Queen switched into her "Gumball" costume and froze Prince Gumball on the ceiling.

She has white hair, like Ice King, and she wears a blue puffy dress that has a light blue pattern on it. She also wears a magic tiara, opposite of Ice King's magic crown, that gives her ice powers.She has long lightning shaped eyebrows. Her skin is light blue and unlike Ice King, she has no nose. 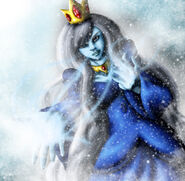 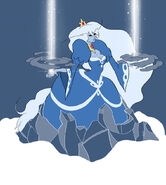 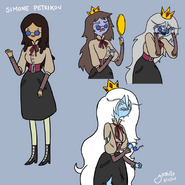 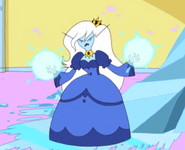 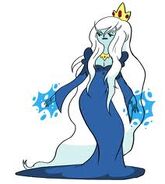 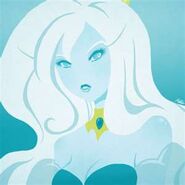 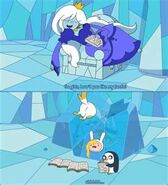 The Ice Queen
Add a photo to this gallery
Retrieved from "https://adventuretimesuperfans.fandom.com/wiki/Ice_Queen?oldid=33145"
Community content is available under CC-BY-SA unless otherwise noted.