Ice Powers have only been shown by both Ice King and Ice Queen. They have been shown very frequently in the show and have been used in destructive ways. Ice King uses his powers mostly on Finn and Jake or to capture a Princess. Ice Queen uses her powers in a very destructive and swift way. It is possible that Ice King and Ice Queen have different techniques of the power. Ice King has the power to create life with ice and snow. He also has the power to manipulate ice, so it can form a certain object such as his ice sword and ice shield moves. In "Hitman," The Ice King used his powers to remove the fire that was spreading around the Tree Fort. Ice King has a Ninja Ice book that can teach you how to use Ice-like ninja weapons and tactics, even if you don't have Ice Powers. These Ninja powers were used by Finn and Jake in "The Chamber of Frozen Blades."

In "Mystery Dungeon", It's Shown that That the User can't Summon Ice in Humid Areas. 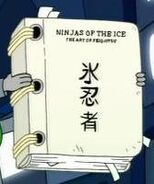 Ninjas Of The Ice