Ice King (Simon Petrikov) is the king of the Ice Kingdom. This guy can be crazy and mean (most likely from the effects of his crown), but he has a good heart (sometimes). His powers are Ice Powers and it comes from his crown. He can call ice to himself and freeze opponents at will. He loses his powers when the crown is removed. He is one of the main characters of the show, has an unusually big beard and some serious Ninja skills! He first appeared in the episode "Prisoners of Love," where he kidnapped 7 princesses and both Finn and Jake. He loves capturing princesses, and his favorite princess is Princess Bubblegum.

Ice King is an old man that is quite skinny but wears his tunic most of the time. It is blue, and he has a large white beard that goes down to his chest area. When he's not wearing his tunic, a lot of brownish bandages can be seen around his pelvis. This could be due to an injury back when he was Simon. He usually wears a crown, but when he's not, some hair sticking upwards can be seen on his head. In the episode "Holly Jolly Secrets Part 1," he dresses up as Princess Bubblegum, and in "Holly Jolly Secrets Part 2," he dresses up as Marceline and sings her Fry Song. He looks fat when wearing his clothes

At his first contact, he was with his fiancé, Betty, but after putting it on, he did things that made Betty leave him forever. Over many years, his insanity grew, and his body had changed. Now, he is obsessed with princesses because they remind him of Betty.

In the episode "Mystery Dungeon," he is trapped in a dungeon with Shelby, Tree Trunks, NEPTR and Lemongrab.

Gunter! Who told you you could fly?! - "It Came from the Nightosphere"

I didn't steal it! I made that crown, with the magic that I stole! - "What Have You Done?"

I thought I hired a hitman not a fireman. - "Hitman"

I won't attack you. Unless provoked. - "What is Life?"

Fools! Fools! You're wasting your tiime. - "Thank You"

The Ice King jamming on his drums.

Ice King to the left in Regular Show

Ice king with board game in " What Have You Done?"

Penguins tickling Him in "Prisoners Of Love" 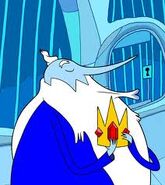 Ice King with pie on his face 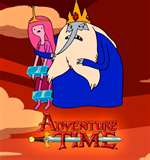 Add a photo to this gallery
Retrieved from "https://adventuretimesuperfans.fandom.com/wiki/Ice_King?oldid=32071"
Community content is available under CC-BY-SA unless otherwise noted.