Hunson's and Marceline's relationships are strained because Hunson ate Marceline's fries. Marcelline did not take it to kindly and even made a song about it.

Hunson originally wore a black suit (somewhat similar to the business men) with a white collared shirt and a red tie with a tie clip. He has a pin on his suit and he has light blue skin with short hair. His cheeks are very skinny and

he has light green eyes with narrowed red pupils. When he turns to his demon state, his skin is blueish with crossed horns, pink tentacles, dark shadowy extra limbs, and a "soul sack" around his neck.

You are by far the most evil thing I have ever seen. - "It Came from the Nightosphere"

Offer your soul to me, dark one. - "It Came from the Nightosphere"

Wish for ponies or whatever kids like. - "Daddy's Little Monster"

They weren't even very good, they were really cold. - "It came from the Nightosphere"

You know, just grabbing a midnight snack. - "Return of the Nightosphere" 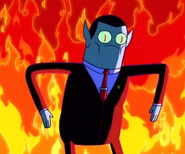 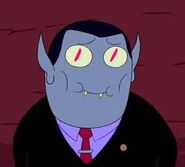 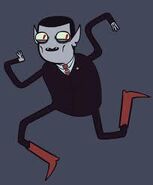 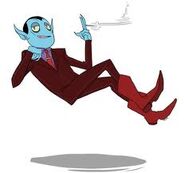 Add a photo to this gallery
Hunson Abadeer/Gallery
Retrieved from "https://adventuretimesuperfans.fandom.com/wiki/Hunson_Abadeer?oldid=31871"
Community content is available under CC-BY-SA unless otherwise noted.