Hot Dog Princess is the ruler of the Hot Dog Kingdom. Her loyal subjects are the Hot Dog Knights, who are really ignorant, and fast thinking, and plays a prominent role in the episode "The Limit." As her name suggests, she's a giant hot dog with a crown that has a small red gem in the middle. Her kingdom is actually just a small fenced-in-patch in a big open field. She was one of the seven princesses that were captured by the Ice King in the episode "Prisoners of Love." Her first appearance was in "Trouble in Lumpy Space", but only made a cameo appearance in the episode. She was participating in the Mallow Tea Ceremony. She likes kissing FInn and smells like old hotdog water 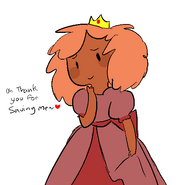 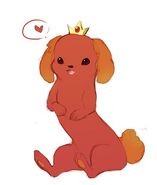 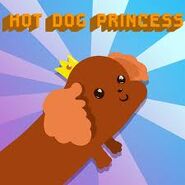 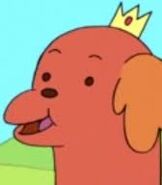 Add a photo to this gallery
Retrieved from "https://adventuretimesuperfans.fandom.com/wiki/Hot_Dog_Princess?oldid=31750"
Community content is available under CC-BY-SA unless otherwise noted.