Honey Bunny is one of the bosses in the BMO game "Guardians of Sunshine." He is also one of the antagonists in the episode of the same name. When fighting him from outside the game, Finn and Jake always defeat him by using the Bomba. However, when in the game, they are unable to gain access to the Bomba, and end up running from him. When Finn and Jake accidently release Sleepy Sam, Honey Bunny, and Bouncy Bee, they try to kill BMO so that they can't be returned to the game. They are then defeated by Finn when he does the Combo Move.

A rabbit that appeers to be melting. 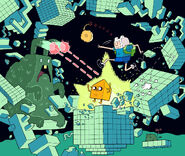 Add a photo to this gallery
Retrieved from "https://adventuretimesuperfans.fandom.com/wiki/Honey_Bunny?oldid=30420"
Community content is available under CC-BY-SA unless otherwise noted.