Guardian Angel made her first appearance in the episode "Dungeon," where she first met Finn, stating that she was his guardian angel. She then brings Finn to the Chamber of the Crystal Eye, traps him into a giant bird cage, and trys to cook him. Finn then runs into Jake, also trapped in the cage, and the two work together to break the rope hanging the cage, crushing the Guardian Angel. The Guardian Angel is actually just a gruesome monster, but does have Healing Powers and the ability to fly with her wings.

She has 2 forms. One is a disguise, where she looks like an angel, then she has a demonic form, where her face becomes disturbing. 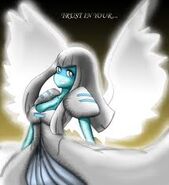