Grand Master Wizard is a wizard that first appeared in the episode "Wizard Battle," where he was the head wizard for the Wizard Battle contest. He has the ability to transform people into cats, which he is oddly fond of, probably because he has a small kitten that distracts him a lot, as seen somewhere in the Wizard Battle.

He is white, giant, has gems for eyes, and a gem on the top of his head. He wears a robe, and has long hair. 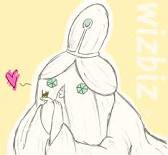