In order to do research for her book about men for Turtle Princess, Lumpy Space Princess goes undercover working for Finn and Jake as their secretary to lure Finn to like her, and ends up realizing other things.

The episode starts off with Finn, Jake, and BMO playing a game that involves tossing colored balls but changes to Turtle Princess who is riding a rocket to deliver fruit pies to Lumpy Space Princess while LSP is struggling to keep the ants away from her. When Turtle Princess asks LSP what she is doing out in the wild LSP changes the subject and says that "the men out here will not leave me alone" but Turtle Princess thinks that it must be nice but then LSP says that it is "horrible."

Just then, Billy, a vulture, appears and LSP gets angry and throws one of her fruit pies at him shouting, "these lumps aren't for sale, Billy!" and turns to Turtle Princess asking her if she is sick of men always after her turtle lumps but she grimly says that she "has never been able to work her T-lumps" and claims that she just knows what she reads in books which gives her the idea to tell LSP to write a book telling her how to work her lumps. LSP agrees claiming that she had always wanted to "write trashy books for ladies" but just then she karate chops a snake to her side and yells, "back off me, Ricky!" and gets back on topic saying that everyone needs to know that when she works her lumps "no man is immune to their influence." Just then Finn, Jake and BMO appear playing their game which gives Turtle Princess the idea of making Finn her test subject and she agrees to do it, for the world.

LSP dresses up in a trash bag and uses cherry jam from her fruit pie as lip stick. She knocks on the door trying to sound sexy saying that she wanted to apply for the adventure secretary add but Jake says that they didn't need one but out of pity Finn let her be their adventure secretary. Once inside she says she needs a secretary desk so she knocks off all of the stuff on the nearest table and settles down. She says she is hungry but Finn only has blueberries and Jake has saltines but she is not amused so she "busts out the cobras to get a better lunch" and Finn finds old spaghetti so he heats it up for her, and she thinks the reason he got it was because of her charm so she starts writing her book titled, "Gotcha!" During the night Turtle Princess calls and asks how the book is going and she responds by saying that it is going great.

In the morning LSP wakes up and goes outside and finds Finn and Jake about to carry rocks up to the mystery mountains. Once at the top they reach the "Lock of Phantoms" where they must throw rocks on a pool of liquid with souls in it that must be deadly, because they are throwing rocks in the pool to find the "safe path." LSP gets bored so she lowers her shoulder strap to reveal her "orange juice" but Finn is too distracted to see her. They finally find the safe path and go inside the cave where LSP tries to woo Finn by taking off her trash bag-dress and accidentally wandering into a glowing portal.

Once inside the portal LSP sees a bunch of mirrors and can't help to looks at how great she looks but just then a mirror Finn appears and is apparently seduced by her but the real Finn and Jake are trying to bust LSP out of the portal. Mirror Finn reaches out to try to kill LSP and she thinks that it was the power of her lumps that turned Finn into a grody monster. Just then Finn and Jake break in and save her from all of the mirror Finns.

LSP wanted an explanation of what had happened and Finn said that Princess Bubblegum sent them on a quest to destroy the cursed mirrors because evil stuff happens when you look at them and LSP freaked out saying that she had to look because she looked so good but Finn said that she didn't need a mirror to know she looked good, he said "beauty was on the inside... like your brain and stuff." They return back to the Tree Fort where LSP is about to start writing her book but just then realizes that she thinks Finn is hot and that his lumps are on the inside. Just when Finn walks in LSP grabs her manuscript and rushes to Turtle Princess where she says that the story wasn't about what she said it would be about but she still loved it.

LSP returns to the tree fort wearing her new lunch bag-dress and tells Finn that he is hot and he thanks her but LSP thanks him instead. LSP floats to the window and just then Jake yells "LSP you're wearing garbage for clothes!" where just just whispers "Gotcha" and floats out the window facing them, but her star accidentally turns off and she falls but quickly turns her star back on and she floats off. 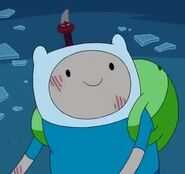 Add a photo to this gallery
Retrieved from "https://adventuretimesuperfans.fandom.com/wiki/Gotcha!?oldid=32812"
Community content is available under CC-BY-SA unless otherwise noted.