Start a Wiki
The Golden Sword (also known as Finn's Golden Sword of Battle) belonged to Finn. It has mostly seen as Finn's main weapon during Season 1 and half of Season 2. It is made out of gold and is in a very poor condition, due to the fact that it is chipped and scratched. It may be because gold is a poor material to be used for a weapon, due to it being a soft metal. The sword's handle is a dark-blue color with a strap around it. At the end of the handle, a round ruby is encrusted in it. The sword was seen in the episode "Business Time", where the Business Men had polished it. It appeared in the episode "The Eyes",where Finn and Jake were fighting Ice King with it. Finn's golden sword got destroyed in the episode "The Real You", when he turned it 4D with the Multi-Dimensonial Bubble Creator, and plunged the sword into a black hole that he created at Princess Bubblegum's Science Conference.

The sword's made out of a golden metal. It has been overused, since it is chipped and scratched. The hilt is black and wrapped. The bottom has a red gemstone on it. 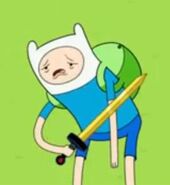 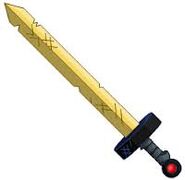 Add a photo to this gallery
Retrieved from "https://adventuretimesuperfans.fandom.com/wiki/Golden_Sword?oldid=31573"
Community content is available under CC-BY-SA unless otherwise noted.