This is for the character. For the episode, click here.

Ghost Princess is a princess of the Land of Ooo. She was one of the princesses captured by Ice King in the episode "Prisoners of Love". She wondered the Land of Ooo as a Ghost until she ascended into the 50th Dead World at the end of the episode "Ghost Princess", when she learned about her death. Before she died, she was known as 'Warrior Princess'. Ghost Princess was unable to pass onto the 50th Dead World, because she is unable to remember how she died. She was killed by her lover, Clarence, but was reunited with him and they ascended into the 50th Dead World together. She is buried inside on an unmarked grave. This is likely due to having lost in war. As an overthrown monarch, she lost all rights to a royal burial. She often appears to be mocked by the other graveyard residents. She is now in the 50th Dead World with Clarence, and will most likely never be seen again.

Her appearance is not a ghostly representation of her living appearance. It is much more simplified. She is transparent blue with long hair.

Her crown is light blue and floats above her head. 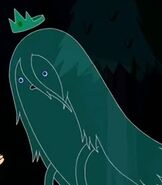 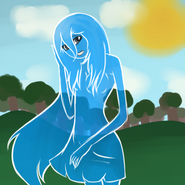 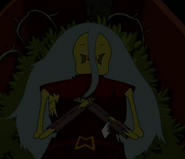 Add a photo to this gallery
Retrieved from "https://adventuretimesuperfans.fandom.com/wiki/Ghost_Princess?oldid=31936"
Community content is available under CC-BY-SA unless otherwise noted.