The Flame Sword was seen in the episode "Web Weirdos." The blade has an aura of fire. It was found by Ed in the forest for damage control for Barb. He thought it would be nice to hang it on the mantle and snuggle by the fire with Barb. When it was found, a dead warrior was leaning on it. After Ed used it to cut down the web, he threw it towards the sky. It is unknown where it is now, it hasn't been seen since.

Ed with the sword

A Modelsheet of the sword 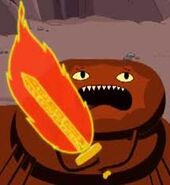 Add a photo to this gallery
Retrieved from "https://adventuretimesuperfans.fandom.com/wiki/Flame_Sword?oldid=31577"
Community content is available under CC-BY-SA unless otherwise noted.