Flame Princess is the princess of the Fire Kingdom and Finn's current love interest (girlfriend). Her father is the Flame King. She is described as evil, but has a soft side as seen in the episode "Hot to the Touch." She is also quick to anger, and seems to be ignorant of much of Ooo. After she hugged Finn, she fled because she thought he was a "Water Elemental." It is unknown to where she ran off after she hugged Finn. When her fire is raging and not even attached to her and someone puts out the fire, it hurts her. Flame Princess mostly fled after hugging Finn because she hurt Finn mostly. Her being in the Lamp for a long time maybe caused her to be in the state of anger and/or confusion. In "Hot to the Touch," viewers could notice Flame Princess admiring the environments like she never saw it before. For example, she was admiring the flowers and burned them and she was surprised and when she touched the water, she was seeing her reflection and maybe was unaware that it was water. As of "Burning Low," Finn is finally her boyfriend. She reappears in "King Worm," where she is seen telling Finn to eat his soup. She appears in "Ignition Point," when she asks Finn and Jake to get her scented candles from the Fire Kingdom. She is voiced by Jessica DiCiccio.

She is a fire elemental. Her hair is thick and made out of fire. She has a ruby gemstone on her forehead and wears a red and orange dress. Pendleton Ward revealed that she is based on a candle. She changes her hair and clothing sometimes in the show.

Flame Princess is a very moody girl. She tends to be calm and happy most of the time, but she can get angered easily, and when she does, she gets really furious and out of control. Fortunately, Finn has managed to help her with that, and throughout the series, she has tended to get mad less and shows to have more control over her rage.

Growth Giant- She can grow into a giant flame monster, this power was used in the episode "Hot To The Touch."

Fireball Throwing- Flame Princess can shoot fireballs out of her hands. Used in the episode "Hot To The Touch."

Evil Fire Head - Flame Princess can turn her head into something where her eyes and mouth become more openly horrifying and her head will be more yellow and she will have 4 sets of flames that go around. Then she will shoot little red fire lasers out of her hands. They were used in the episodes "Incedium, Hot to the touch (Without the lasers), King Worm (without hand lasers), Ignition Point, and Vault of Bones.

Touching - This is not an intended weapon, but when Flame Princess touches people it hurts them really bad and sometimes serves as a weapon. It was used in the episodes Incendium, Hot to the Touch, Burning Low, and her Mini-Version used it in All the Little People.

Levitation - She can fly that looks like a giant meteor. This was used in Frost and Fire.

Flame Sword - She can produce a bright blue flame sword out of her hands. This was seen on Vault of Bones.

Arabian Dress - In the episode "Ignition Point" Flame Princess was wearing a clear layer of silk over her dress and had her hair up in a ponytail in the back, she also had buns on the sides of her hair. She was also wearing red shoes. This was arabian clothing. She was even wearing this while she was sleeping.

Tame the Flames - In the episode "Vault of Bones" Flame Princess was wearing her hair down and she was wearing a strapless dress that was flaming at the bottom, but in a very calm and low way.

Wildfire - In the episode "Time Sandwich" Flame Princess was wearing a spiky, frilly, alabrant dress and she had her hair being worn down on the sides, but up in the back.

Oceanbird Springwear - In the episode "Earth & Water" Flame Princess was wearing her hair down, and long. She had a white floral dress.

Flame Queen - In the episode "Earth & Water" Flame Princess was wearing a metal suit and her face looked like her dad's. She also had a titara on with her red gem in it instead of on her forehead.

Hot To The Touch 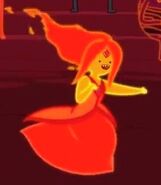 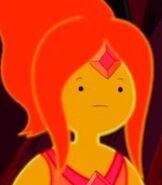 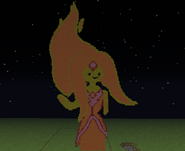 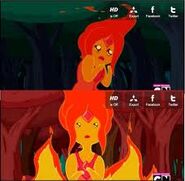 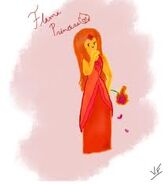 woopsie! who pushed her into the river? i guess i can comfort Finn when he finds out... *cough* tier 2 *cough*
Add a photo to this gallery

Retrieved from "https://adventuretimesuperfans.fandom.com/wiki/Flame_Princess?oldid=33157"
Community content is available under CC-BY-SA unless otherwise noted.