Flambo is a character from Adventure Time. He is a Fire Person (flambit) and even knows some magic of fire spells. He has a Bronx (Northern New York City) accent. He made his first appearance in the episode "Business Time," where his only part was to light up Finn's flamethrower. He made another appearance in the episode "The Chamber of Frozen Blades," where he gave Finn and Jake information about Ice King for coal, which is a snack for Flambo.

His longest amount of screen time was in the episode "Incendium," where he instructs Jake on how to go through the Fire Kingdom. He possesses the ability to make someone temporarily fire-proof.

It is believed that he came from upseting Flame Princess, when she turned bystanders into little 'Flambo-like' creatures (flambits), as seen in "Incendium."

He is a cat-like living creature made of flames.

The Ice King is plannin' to nabs a princess today! - "The Chamber of Frozen Blades"

I cast flame shield on ya's.Also I spat on ya's.-"Incendium." 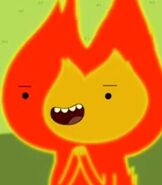 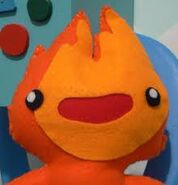 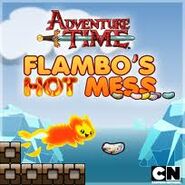 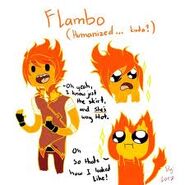 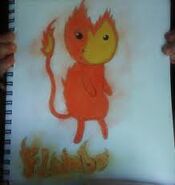 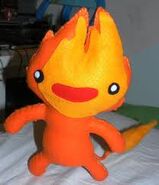