The Fire Kingdom is the home to most of the Fire People of the Land of Ooo. It is ruled by Flame King and is located within in the southern area of Ooo. It was first shown in one of Marceline's flashbacks in the episode "Evicted!" It was later shown again in the episode "His Hero," where Billy saves Cotton Candy Princess from the Fire Count. It was then shown in the episode "Thank You" where the Snow Golem made a journey there. It was later shown again in "Incendium," where Jake was trying to find a new love interest for Finn. This is the episode where Flame Princess and her father, Flame King appeared and were introduced. Flambo is the one who leads Jake to the Fire Kingdom, as Flambo originally comes from the Fire Kingdom.

The place is filled with many lava pools. There are many volcanic mountains around the area. It doesn't seem to be able to support most forms of life. Some of the volcanic mountains may by buildings/homes for the fire people, such as the Flame King's castle located on the left in the picture above. The sky in this land is deep red and a haze of smoke also covers parts of the area. Only a fire elemental can survive in the high temperature, that is why you need a flame shield. 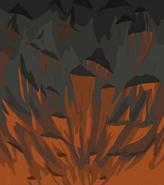