Can this couple be true? Leave your opinion or give some evidence about Ice King and Fionna.

Even though she is a fan-made character by Ice King, she admitted her love in the episode "Fionna and Cake" but was voiced by Ice King.

They would be a horrible couple.

Plus, she's not real so it wouldn't be like Finn and Ice King.

My god what the hell is wrong with them? :((

BOO this couple will die fast

I think that this couple makes Ice King look like a pedo. Fionna is 14 years old. 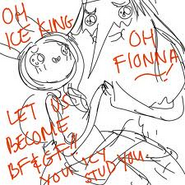