Fionna (previously spelled Fiona, and is also known as Fionna the Human Girl) is a fictional character and the gender-swapped version of Finn, created by the Ice King in his fan fiction. She was created during the series by character designer Natasha Allegri, as a series of web comics and drawings. She and the other gender-swapped characters appeared in the season three episode, "Fionna and Cake." She is usually seen in the company of her own stretchy companion: Cake. Fionna's nemesis is the Ice Queen. It's evident that like Finn had a crush on Princess Bubblegum, Fionna has a crush on Prince Gumball. She has appeared again in Season 5 in the episode "Bad Little Boy".

While usually appearing as black dots, her eyes are seen as blue when enlarged. She wears a rabbit-themed hat (similar to Finn's bear-themed hat) with exposed locks of blonde hair. And unlike Finn, her neck is showing. Her outfit includes a tealish-blue shirt with elbow-length sleeves, a dark blue skirt, and high-knee socks with two thin, light blue horizontal stripes at the top. Fionna is a heavier set than Finn (which Natasha referred to as "chubby cute"). She has a green backpack (similar to Finn's backpack ovalish shaped) and Mary Jane shoes. 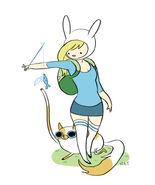 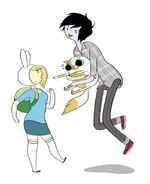 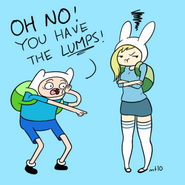 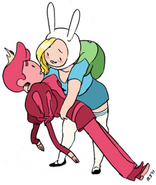 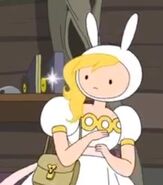 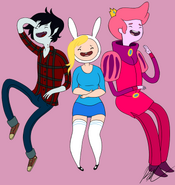 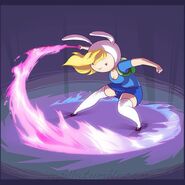 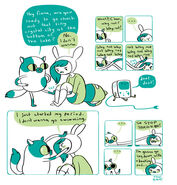 PMS time with fionna
Add a photo to this gallery
Fionna/Gallery
Retrieved from "https://adventuretimesuperfans.fandom.com/wiki/Fionna?oldid=31008"
Community content is available under CC-BY-SA unless otherwise noted.