Finn & Flame Princess have just met, Do you think Finn has a keeper? Tell me your opinion or evidence on this.

Finn first met Flame Princess in the end of the episode "Incendium." It was kind of a love at first sight thing. After Flame Princess was hurt by the Liquid Pyrotechnics, she reverted back to her normal form. Finn caught her as she fell off his house. Flame Princess woke up and stated that Finn thinks something is wrong with her. She then tells Finn not to mess with her again. She slaps Finn and then leaves, Finn then says "I think I have a crush." Then in the episode continuation in season 4 episode 1 , "Hot To The Touch," it is seen that Flame Princess also loves Finn and Finn admits to her that she's beautiful and he like-likes her but they cannot be together because Finn is a "Water Elemental" and she is a "Fire Elemental." Though, due to "Burning Low" and "Ignition Point" it is obvious that they have moved passed that and have started going out.

Uh.. I heard FP specificaly say, "Even if we like each other, we'll only hurt each other."

THAT is proof that she likes him. But there is a very small chance of them dating because NEPTR sprayed her with foam. She thought Finn did that. But anyway, I love this pairing. {{subst:User:RjGraffiti2/Sig}}17:09, June 11, 2012 (UTC)

A relationship is most likely

This is the best relationship ever! FINNXFP FOREVER!!~ Adventuretimegurl123 (sorry cant seem to get my sig to work here :3 )

There relationship is fantastic and show a glistening beauty of nature. To those who hate this relationship,you guys are the most suckest person i ever met similar to PB! >:d

FINNXfFLAME PRINCESS MIGHT BE THE BEST RELATIONSHIP IN THE SERIES!!!

WTH!!! Why the heck are there so many people against FinnXFlame pricess? They are definately the best couple in the series and that is no matter of opinion for me.

First of all: Finn and Flame princess are already dating geniuses!

Second of all: Who else could he possibly date? Flame Princess is the most human person in existance. Why cant he wait for another human you ask? Because he is the only person left alive!!! Why not Fionna? BECAUSE SHES IN ANOTHER DEMENTION THATS WHY!!!

Third of all: Flame princess is the only 13 year old girl in the land of OOO.

Adventure Time is not really about the romance but I think they are a good couple because they both like like each other. Not like how PB betrayed Finn. If you saw The Lich, PB cut Finn's face. She said it was an "accident" but no one believes that.

Finn and FP are perfect for each other. One, their personalities are different ans as they say "opposites attract" Two, Flame Princess is the same age as Finn. And three, since those two got together Finn has said the most romantic stuff on this show ever! Can't wait to see them again in season 5.

Man, that Princess Bubblegum overreacts to everything. She is totally jealous of Flame Princess for going out with Finn. Ever since Finn got ober her she's been stalking him, she randomly appeared inside of their house stealing their money saying that she was collecting taxes just to make him talk to her for like 5 seconds, then as soon as she found out they were dating she's been trying to force them to break up with each other. Flame Princess is so much better for Finn than Princess Bubblegum.

I cant wait for the season 5 episode of Fionna and Cake that has Flame Prince in it. Although I do hope that they have Flame Princess appear in more episodes before and after that instead of her not appearing, being mentioned, or just her ruby being seen. Those two are perfect for each other and deserve more episodes.

If there were an episode were Finn and FP are adults they can be married! 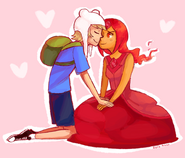