Engagement Ring Princess is a princess of an unknown kingdom in the Land of Ooo. She wears a wedding dress with a bow around her waist and has pink hair with a huge engagement ring on her head. She made her first appearance in the episode "Loyalty to the King," where she was held captive by Ice King, but was later rescued by Finn and Jake. When he was the "Nice King," she believed that Nice King was not really Ice King, but later beat him up when it was revealed that he was the Ice King. She also made a cameo in the episode "Ricardio the Heart Guy." She had another cameo appearance in the episode "The Lich," along with every other princess.

She is blue and has pink hair. She has a giant engagement ring on her head with a blue gem in it. She has a white dress with a bow around it. 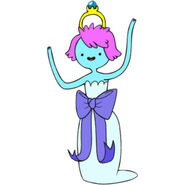 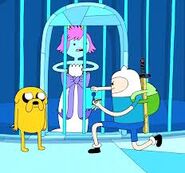 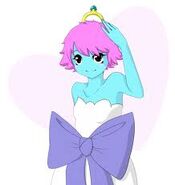