She is dressed in green robes with a large green gem on top of her head that acts as a crown. Her skin is green and she has a long nose. 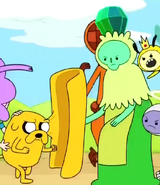