Embryo Princess is a princess of an unknown kingdom. She has appeared in "What is Life?" and "Loyalty to the King." She has a crown much like Princess Bubblegum's crown, the only difference being the color of the gem stone, and seems to have some sort of telepathic power that allows her to float. It is unknown of what kingdom she rules over, or if she even rules one at all.

Embryo Princess is a light pink fetus with purplish reddish veins on her head and body. She has a golden tiara with a red gem in it. She floats around in a floating, pink, watery embryo with some white glare shining on it. Her voice sounds very gargled because of the watery embryo that she's in. 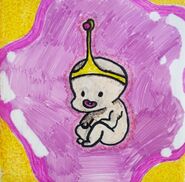 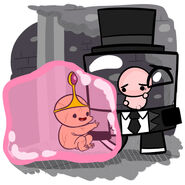