Earth is the planet that holds the continent Ooo. It was first seen in the episode "The Real You." It was later seen in "Five Short Graybles," where the Storyteller has an image of the World's current view from a little device. Another time of seeing the continent of Ooo was when Finn was transporting to Mars in the episode "Son of Mars." It seems to have a huge crater in it. This is presumably because of The Great Mushroom War. 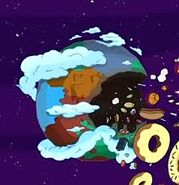 Add a photo to this gallery
Retrieved from "https://adventuretimesuperfans.fandom.com/wiki/Earth?oldid=26316"
Community content is available under CC-BY-SA unless otherwise noted.