Start a Wiki
Dr. Princess is a doctor, who at least at the time that in the episode "The Chamber of Frozen Blades" took place, is a doctor at a hospital for Rock people. In the before mentioned episode, Ice King brings Gunter to her because something is wrong with Gunter. Although Ice King hits on her and ends up kidnapping her, she was not bothered by him and tended to Gunter's problem. Dr. Princess also reveals in this episode that she isn't even a princess, and that "Princess" is just a surname. She later makes a small appearance in "Mortal Recoil", when she is with the other doctors putting Princess Bubblegum back together for a second time.. She also makes an appearance in "Wizard Battle" as The Science Whyzard. She was kicked out of the battle though, because she was using science, and not magic. She made a cameo in "Princess Monster Wife". Her latest appearance however is in "Princess Cookie"

Dr. Princess is a tall, young, slim woman and seen wearing a glasses like Ice King's fiancee, Betty. She wears a lab coat and is green skinned. Her hair is tied into two pony tails.

Princess is just a surname. - "The Chamber of Frozen Blades"

Description of video: Dr. Princess's first appearance on AT, where she was taking care of Gunter and was abducted by Ice King. 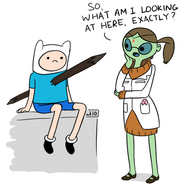 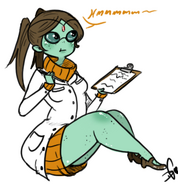 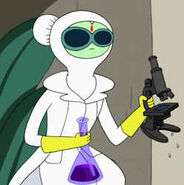 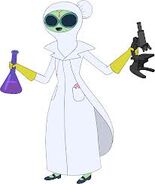 Science Whyzard
Add a photo to this gallery
Retrieved from "https://adventuretimesuperfans.fandom.com/wiki/Dr._Princess?oldid=23487"
Community content is available under CC-BY-SA unless otherwise noted.