The Door Lord made his first and only appearance in the episode "What Was Missing." This door lord is one of many door lords. They used to be kept locked up, as said by Princess Bubblegum, "We used to lock them up. But they kept escaping... because they're door lords." In the episode "What Was Missing," this door lord stole the most precious items of Finn, Jake, BMO, Princess Bubblegum, and the lord then hid within the "Door of the Door Lord" that read "THIS DOOR SHALL YIELD TO NO COMMAND SAVE FOR A SONG FROM A GENUINE BAND." Finn, Jake, BMO, Princess Bubblegum, and Marceline then formed a band in which they tried to defeat the door lord. At the end of the episode, when Finn is finally successful in defeating the door lord, they find out that the door lord was trying to teach them that "the real treasure is friendship". Although they all understand this lesson by the time they reach the door lord, this did not stop the group from beating him up. All in all, the door lord seems like a nice guy, except for stealing the possessions of people. 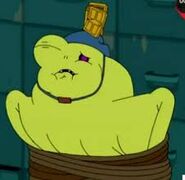 Modelsheet for The Door Lord
Community content is available under CC-BY-SA unless otherwise noted.
Advertisement