Start a Wiki
Donny is a Grass Ogre who makes his most prominent (and only) appearance in the episode named after him, "Donny." He is considered a jerk by many people, including Finn and Jake. Donny seems to spend his time saying and doing things to hurt other's feelings for his own amusement, and, in the episode in which he was featured, his main target of abuse seems to be the House People. By doing this, however, he releases his anger which turns into gas called Obnoxygen, which is poisonous to Why-Wolves, which pry on the House People. When Finn and Jake meet Donny however, they change him to be more "civilized," and end up having to insult him to revert him back to his jerky state to save the House People from the Why-Wolves. 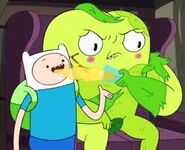 Add a photo to this gallery
Donny/Gallery
Retrieved from "https://adventuretimesuperfans.fandom.com/wiki/Donny?oldid=28244"
Community content is available under CC-BY-SA unless otherwise noted.