Demon Cat is, as his name states, a cat who is also a Demon. He has approximate knowledge of most things. He calls Finn "Frank the Human Boy" and Jake "Jack the Dog." His first and only appearance was in the episode "Dungeon," where he first meets Finn while coming out of a cave. He chases Finn around trying to "pounce" on him. He also has a huge fear of dogs.

He is a teal cat with his right hand and right foot disattached (but still floating) from his body. He has pinkish eyes, and purple vein-like attachments around his body. He also has a tounge that looks like a smaller orange cat and is technically blind.

I have approximate knowledge of many things. - "Dungeon" 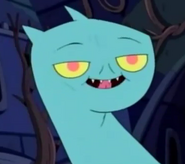 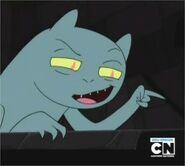 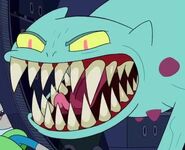