Death's first appearance was in the episode "Death in Bloom." Finn and Jake go to Death to retreive Princess Bubblegum's Princess Plant back that they killed. He challenges Finn to a music battle and wins, but gives them back the plant anyway, once he finds out that they know Peppermint Butler. He makes his second appearance in "Sons of Mars," when he takes Abraham Lincoln's immortality for Jake's life.

Death is a musician like Jake, but way exprienced with every other instrument. But his best instrument is the Microphone & Double-Foot Paddle Drum Set without the rest of the basic sets. Death has never lost a music battle EVER!

You can't kick me 'cause your brain is stupid! "Death in Bloom" 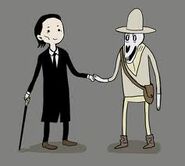 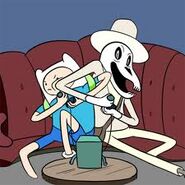 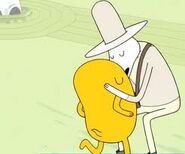