Start a Wiki
Cute King is the King of the Cuties. He is very determined to kill someone because no one ever takes him very seriously. He made his first apperance in the episode "Conquest of Cuteness," where he and the other cuties were planing to kill Finn and Jake. At the end of the episode, he manipulates Ice King to make him a sandwich.

He is a small person, who has a mushroom shaped body with his head being pink and white, and his torso being striped-colored of blue, yellow, and red. His arms are attached to his head and he wears a small yellow crown. There is another face located on his posterior.

"Finally! I get to do the victory dance!" - "Conquest of Cuteness"

"I command you to make me a sandwich!" - "Conquest of Cuteness" 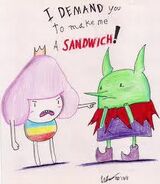 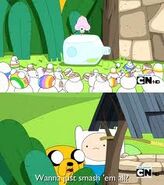 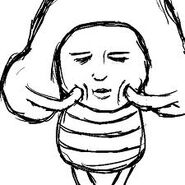 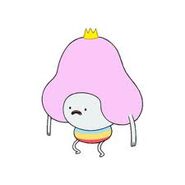 Add a photo to this gallery
Retrieved from "https://adventuretimesuperfans.fandom.com/wiki/Cute_King?oldid=28976"
Community content is available under CC-BY-SA unless otherwise noted.