Clarence wears a large coat over him, he has a band on his head which has long hair on top. He has 2 antlers with a small key chain like sword on it. 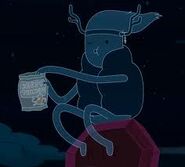