Cinnamon Bun takes the place of the kingdom idiot (which all kingdoms needs in any good show). He has a short-attention span and needs to be watched over constantly, to keep him from causing trouble for himself and others. It was because of Cinnamon Bun's fault that the zombie virus spreaded for the second time in the episode, "From Bad to Worse." He also seems to have a crush on Lumpy Space Princess as seen in the episode "The Creeps," and a second mouth as seen in the episode "Five Short Graybles," when he eats Princess Bubblegum's perfect sandwich. He barely knows what he is doing or think most of the time. Oddly, he had a much different voice in The Enchiridion!, compared to much more recent episodes.

I said YOU DON'T REALLY FOCUS AT ALL! - "Power Animal"

Oh Finn! You always focus in everything you do! - "Power Animal" 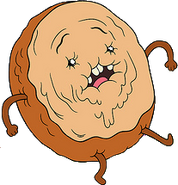 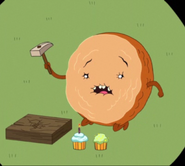 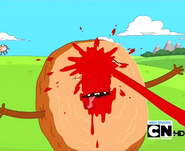 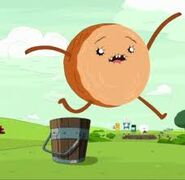 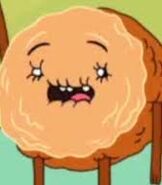 Add a photo to this gallery
Cinnamon Bun/Gallery
Retrieved from "https://adventuretimesuperfans.fandom.com/wiki/Cinnamon_Bun?oldid=31885"
Community content is available under CC-BY-SA unless otherwise noted.