Candy Cemetery is a place located outside the Candy Kingdom. It was first introduced in the episode "Slumber Party Panic," where Princess Bubblegum made her experiments on the dead Candy People that laid at rest here. At first, she was forming her Decorpsinator Serum here and testing it on the dead Candy People, which lead the Candy People turning into zombies lusting for sugar. Some of the zombies tried to attack Princess Bubblegum, but Finn protected her and then they left the cemetery. Later, Starchy came into the area not knowing of the zombies, he was there to deliever a shovel to PB, but before he knew it, a zombie had risen from the ground. This frightened Starchy, which lead to his death. After the episode, it is unknown if the Candy People still use the cemetery, due to the fact PB's Decorpsinator Serum had revived all the dead Candy People that laid to rest there. 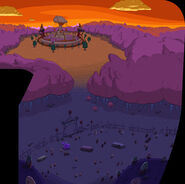