Brad makes his only appearance in "Trouble in Lumpy Space." Like all Lumpy Space people, he comes from Lumpy Space. He is Lumpy Space Princess's ex-boyfriend, and Melissa's current one. Unlike most Lumpy Space People, he actually walks, and has actual legs. He also doesn't have the appearance of a typical Lumpy Space Person, and is very small. Lumpy Space Princess apparently gets nervous and depressed around him due to their past relationship. Brad's voice is emotionless, monotone, and has two lines in the series so far. According to Lumpy Space Princess, she and Brad ate chilly cheese fries together before, showing they had a good relationship. In "The Creeps ," LSP reveals that they broke up because Brad kissed LSP on the mouth and LSP wasn't ready for that or him yet. Melissa makes fun of LSP since Brad was her ex-boyfriend. Brad does seem to still care a little bit about LSP, because he asks "You miss me yet, LSP?"

Brad is a tealish color, and is much smaller than most Lumpy Space People. He is relatively smooth for a Lumpy Space Person as well, having only a few lumps on the back of his head, and very small lumps under his arms. Unlike other lumpy space people, it has legs. His eyes seem to be in a careless mood.

You miss me yet LSP? - "Trouble in Lumpy Space" 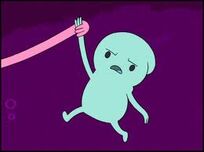 Brad in Car
Add a photo to this gallery
Retrieved from "https://adventuretimesuperfans.fandom.com/wiki/Brad?oldid=22222"
Community content is available under CC-BY-SA unless otherwise noted.