Billy was the true hero in The Land of Ooo from a long time ago. Finn & Jake are the legacy of Billy. Billy first appeared in the episode "His Hero," where he seems to be the Finn of the past, because he was the hero of Ooo, saved princesses, and even had a dog sidekick. Now, Billy has grown old and seems to spend his pacifistic life in a cave known as "Billy's Crack." When Finn and Jake meet Billy, he tries to tell them that violence solves nothing, because those he saved would always be in danger again. At the advice of their hero, Finn and Jake try and make a life helping people without using violence. They ultimately fail and tell Billy that the best way to be heroes is to use violence. Though he protested at first, as Finn and Jake walk away, Billy smiles and nods as if everything happened according to his plan. He appeared again in the season finale of season four, but as a body suit for The Lich. 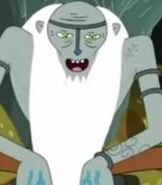 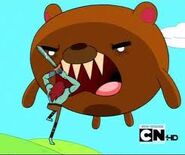 Add a photo to this gallery
Billy/Gallery
Retrieved from "https://adventuretimesuperfans.fandom.com/wiki/Billy?oldid=31949"
Community content is available under CC-BY-SA unless otherwise noted.