Bee Princess is a princess that first appeared in the episode "What is Life?" in Ice King's Imagination Zone. She also appears in "Loyalty to the King," as one of the princesses that the Nice King wants to marry him.

Bee Princess is a humanoid-like bee that is entirely yellow except for two black stripes around her body. Her crown is a normal crown with a red ruby in it. 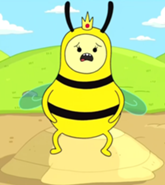 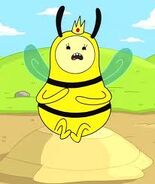