The Bee is seen in the episode "Evicted!," as well as in the end credits of Adventure Time. In "Evicted!," Finn and Jake disturbed it's nest because Finn had put his foot inside it's hive. It got angry and then puked honey on both Finn and Jake. Also in "Evicted!," the Bee can be seen in Mr. Cupcake's icing, during the party that Finn and Jake hold. It appears in his icing for a total of two scenes. 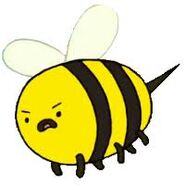 Add a photo to this gallery
Retrieved from "https://adventuretimesuperfans.fandom.com/wiki/Bee?oldid=26972"
Community content is available under CC-BY-SA unless otherwise noted.