BUFO is the character that appears in the episode "Wizard." Several tadpole-looking creatures live inside of him. The tadpoles like to talk simutaneously, but don't have to, as shown from when the others complained when one of them was off. He was later seen in "Wizard Battle." He was one of the particpants there too. 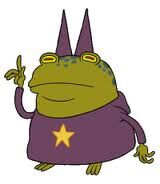 Retrieved from "https://adventuretimesuperfans.fandom.com/wiki/BUFO?oldid=31457"
Community content is available under CC-BY-SA unless otherwise noted.