BMO is a super cute, Gameboy-like character. BMO is gender less. Throughout the series, different characters call BMO a "him" and others caIl BMO a "her." Because of this, in the episode "Fionna and Cake," BMO has no difference in appearance. BMO is fun to play with and is very useful in technology wise. BMO is one of the main characters as well. BMO has several different ports on his body, from USB to VHS, and BMO "IS" camera too. BMO is also a little strange when Finn & Jake are not around. As seen in the episode "Five Short Graybles," BMO talks to "Football" (BMO's Self) in the mirror and pretends that BMO "is" a real boy. Football then appears once again in "Five More Short Graybles." Also in "BMO Noire," BMO was the main protagonist in the episode. BMO's appearance is a little turquoise video game player.

BMO is Mentioned in "Mystery Dungeon" by Ice King after he accidently took NEPTR instead of him.

I am incapable of all emotion, but you are making me chafed. - "Donny"

BMO is camera. - "Conquest of Cuteness"

If anyone try's to hurt Finn, I will kill them! - "Incendium "

BMO CHOP! If this were a real attack, you'd be dead. "Card Wars"

Sorry, but forgetting is not in my job description. - "BMO Noire"

Finn, why are you fighting with your friends? Jake you know? This can be the end. Romance or Action does not matter. Hurting your friends will make sadder. Guys you know your much more then this. You two, please stop, or you'll undo, all that you've been throughooo. Just hug, and it's agreed: Your love will not delete. "Video Makers" 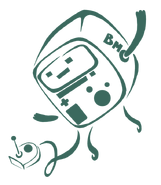 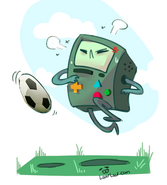 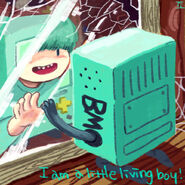 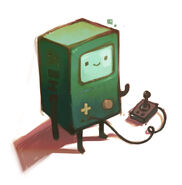 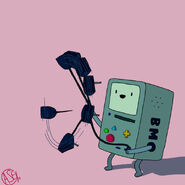 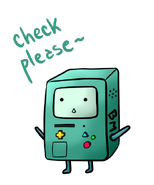 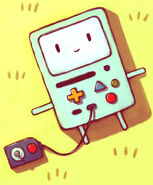 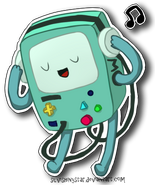 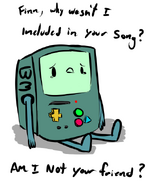