The armor is completely golden, it only covers the upper body (besides the arms) and the head. The helmet on the head is in the form of a skull with horns and has long golden braided hair under it. 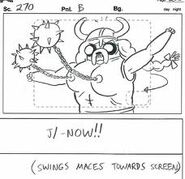