I think the show has been doing great but I noticed that some of the episodes are a bit bland. Even Pen Ward stated that it is hard for the writters because they are running out of ideas. But I love the new eps and will watch them till the end. M1870 23:43, April 15, 2012 (UTC)

This show is just so awesome! Pen Ward is awesome, but the fact that Rebecca Sugar is leaving sucks. But the show is too awesome to stop watching because of that. 2000 - The futuristic sound of Balloon Music (talk) 23:31, October 3, 2012 (UTC) 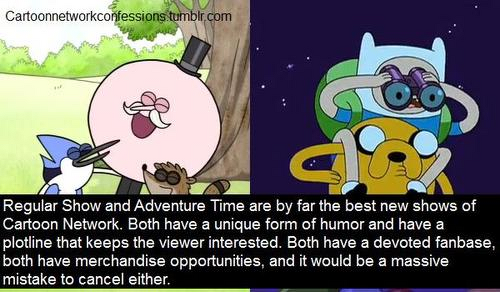 (CrazyTigerLady) I love this show. It is by far my favorite show. Sadly, I miss the humor of the old episodes. I mean, in Dungeon, Finn radically disregards saftey and charges straight through a dungeon of obstacles. He does it in a fun way, and has a few fights while he's at it. However, in Mystery Dungeon, his entire opinion on dungeons changes. He goes from being fun and crazy to being methodical, and plainly, very boring. I know, I know. Finn is 15 now, and has grown up. But I miss the old Finn. And, seriously, can't he say 'Adventure Time' once? He hasn't even gone on an adventure in forever. And when they do go on adventures, they are slow and uninteresting.

I know it sounds like I must hate the show, but it's not that. I like a few of the newer episodes, but most are a waste of my time. Root Beer Guy was just awful in my opinion.